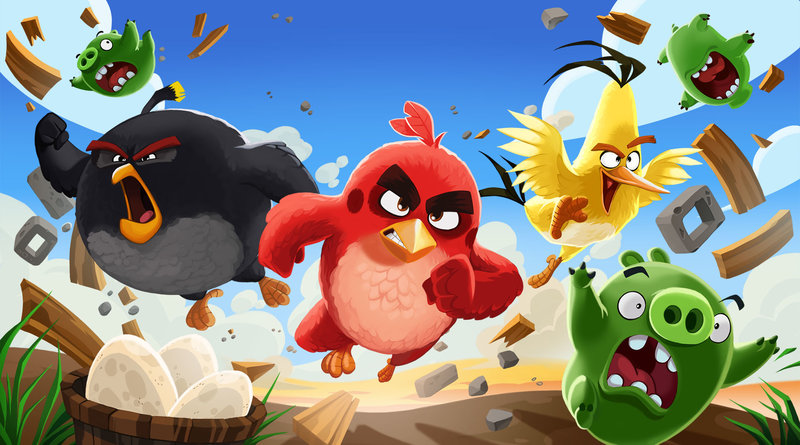 Angry Birds is a game developed by Rovio Entertainment. Inspired by a sketch of stylized wingless birds, the game was first released for iOS and Maemo devices in December 2009. Since that time, over 12 million copies of the game have been purchased from the iOS App Store, which has prompted the company to design versions for other touchscreen-based smartphones, most notably those using the Android, Symbian, Windows Phone and BlackBerry 10 devices. Angry Birds is a game where you have to throw a series of birds against different forts and structures made by little pigs. The objective is to take down all the pigs and cause as much destruction as possible in the process.you have different types of birds to throw. The classic red one doesn’t have anything special, but the black bird will explode, the green bird can come back like a boomerang, among many others.In the game, players use a slingshot to launch birds at pigs stationed in or around various structures with the goal of destroying all the pigs on the playing field. As players advance through the game new types of birds become available, some with special abilities that can be activated by the player.The game’s popularity has led to the production of additional versions of Angry Birds for personal computers and gaming consoles, as well as a market for merchandise featuring its characters, a feature film and several seasons of television cartoons. The series has since expanded to include titles for dedicated video game consoles and for PCs.

Angry Birds offers hundreds of different levels in which you have to use your brain and abilities. The scoring is based on a three-star system that keeps you wanting to play the same levels until you get all three stars. The player controls a flock of multi-colored birds that are attempting to retrieve their eggs, which have been stolen by a group of hungry green pigs. The objective of the game is to eliminate all the pigs on the level. Using a slingshot, players launch a limited set of birds with the goal of either striking the enemy pigs directly or damaging their surrounding structures, causing the blocks to collapse and squash the pigs.Upon completing each level, players receive one, two, or three stars depending on the score received. Players may re-attempt unlocked levels as many times as they wish in order to complete them successfully or to earn additional points to get more stars.